Winner of Book and Chat!

Last week I opened a new contest where the winner would receive a signed copy of my latest thriller, FRANTIC, and a Skype or phone conversation with me. To enter all one had to do was purchase my new novella, REARVIEW, for $1.99, then leave a comment on my blog.

The results are in and the winner of the book and chat is . . .

Congratulations, Tim. I’ll be in touch with you shortly so we can arrange a time to hook up.

Thank  you to all who entered. I hope to do this again as I want to make an effort to talk more with readers, hopefully face to face.

“I Want to Talk to You!” Giveaway

To celebrate the release of my 7 Hours novella REARVIEW I’m hosting a giveaway and chance to speak with me directly about whatever you wish.

Here’s what you have to do: All this week REARVIEW is being offered at a special promotional price. Amazon and B&N have it for $1.99, Christianbook.com has it for $1.59.

#1: Buy the book this week while it’s on sale (sale ends Saturday at midnight). It’s under $2, not bad, and you don’t have to have an e-reader to read it. Both the Kindle and Nook have free apps you can download to your MAC or PC. Then you can read the book right on your desktop or laptop.

#2: After you buy it, leave a comment on this blog post simply stating “bought it” or “got it” or something like that. If you’ve already purchased it, that counts, just leave a comment. Yes, we’re going by the honor system here . . . I trust you.

#3: Enjoy the story. That’s it. You’re entered. Winner will be announced Monday morning.

What you get: One lucky winner, drawn at random, will get a signed copy of my latest thriller, FRANTIC, and a conversation with me either via Skype or regular phone (I prefer Skype if you have it, face to face is always better). We can talk about anything you want. Ask questions. Ponder the meaning of life. Berate me for killing animals in my stories. Whatever you want.

So are you game? 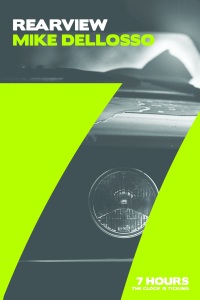 All this week my 7 Hours novella, REARVIEW, will be on sale at all e-book sellers.

Professor Dan Blakely has it all . . . until a false accusation leaves him in financial ruin with nothing to fall back on and little hope.

In a moment of desperation, he decides to do the unthinkable. But when he loses control of his SUV and careens down the side of a mountain, his plans take another turn.

Trapped beneath the frame of his mangled vehicle, Dan is visited by a mysterious stranger who offers him three choices. Filled with regret, Dan makes a decision . . . but little does he know that his troubles have only just begun.

Here’s where you can get it:

And check out the 7 Hours landing page while you’re at it too.

Okay, so I’m part of this group of authors who wrote 7 novellas as part of a series. Each book contains one common thread, a mysterious character named Thomas Constant who shows up at the moment of someone’s death and offers them a strange gift: 7 more hours to live. They choose whether to go back in time and relive any 7 hours of their life or to continue living 7 more hours.

It’s quite an interesting concept and the books are all outstanding. The other authors involved are Rene Gutteridge, Ronie Kendig, Robin Parrish, Tom Pawlik, Travis Thrasher, and James Wilson.

The books will release in e-book format only at first. If you don’t have an e-reader, don’t panic. You can download the Kindle app to any PC or Mac and a variety of phones and tablets.

You can read about all the books here.

Tyndale, our publisher, is going to offer each book at a promotional price of $1.99, one book per week for 7 weeks. And my book, REARVIEW, is first. The books are available now on Amazon but I’m asking you to wait until Monday, May 14. REARVIEW will be $1.99 for the entire week and I’d like to flood the sellers with orders and really make a statement.

Go to the Amazon page now and check it out but please wait until the week of May 14 to order it. Then do the same for all the books. One a week will be offered for $1.99!

I’ll post a couple reminders as time gets closer . . .

In the meantime, please repost this, Twitter it, Facebook it, whatever to help get the word out. Thank you!

Life happens at the speed of now. Know the feeling?

So much has been going on lately at times it feels like my head is spinning and my eyes can’t focus on any one thing. I’m in the midst of a writing perfect storm.

Editing A Thousand Sleepless Nights. Writing The Prodigy. Promoting Frantic and Rearview (my 7 Hours novella that releases in May).

Here are some important updates:

Editing for A Thousand Sleepless Nights is almost finished. It releases in October. To see the cover and keep up with my alter ego, Michael King, visit his blog where he posts regularly.

My next suspense novel, The Prodigy, is underway. I have a June 1 deadline and A LOT to write. Am I panicked? Not yet, but in a couple weeks I will be.

**IMPORTANT**  I know I announced a little while ago that my next novel would be a sequel to Frantic. But as things usually go in the publishing world, plans changed. The sequel will have to put on the back burner. The Prodigy is another stand alone but I promise you’ll love this story. It’s full of intrigue and mystery, action, and of course, suspense.

Rearview releases in just a few weeks along with the other six 7 Hours novellas. Initially, they will only be available as e-books through all the major outlets. Priced at $2.99, I hope they all sell well and fast. Be on the lookout for them. When they release I think they’ll be offered at a special price.

Frantic is being enjoyed by many readers. If you haven’t read it yet, here’s a review by The Suspense Zone. Order your copy today.

**MAJOR IMPORTANT** Starting in May, I will no longer be blogging on this site. The site will be devoted to information about my books, speaking, teaching, and other writing. All my interactions and articles and whatever else will take place on my Facebook author page. If you haven’t “liked” it yet, please do so and check in often. I’d love to hear from you.

That’s it for now. I’ll give one more heads-up about this site at the end of April.

So much has been happening in the writing side of my world that at times it’s difficult to keep up with. I find myself just holding on and enjoying the ride.

FRANTIC  is off to a great start with lots of interest and some wonderful reviews so far. The trio of main characters–Marny, Esther, and William–are proving to be a real hit, capturing hearts and imaginations. If you haven’t gotten your copy yet, get one today!

The SCREAM promotion went very well and succeeded in introducing my writing to a lot more readers. Most were enthusiastic, some didn’t appreciate being “tricked” into reading “Christian propoganda.” I always find those comments intriguing (and hypocritical) for so many reasons. Maybe some day I’ll get into that.

May 7, my novella REAR VIEW releases with Tyndale. It’s part of the larger 7 Hours project where I teamed with six other authors and we each wrote a novella exploring the concepts of time and death. The other authors are Rene Gutteridge, Ronie Kendig, Travis Thrasher, Robin Parrish, Tom Pawlik, and James Wilson. You can find out more about 7 Hours here.

In October A THOUSAND SLEEPLESS NIGHTS releases. If you’ve gotten your copy of FRANTIC you’ve probably read my note to the reader in the back of the book concerning this book. Have no fear; I will continue to write suspense as well. More coming on this with a major announcement in March. Stay tuned . . .

February, 2013 will see the release of the sequel to FRANTIC, presently untitled. Unfortunately, for Marny, Esther, and William, things only get worse but one of them will find ultimate freedom.

Then in October, 2013 A MILLION MILES FROM HOME will release.

And that’s the line-up so far. So lots to look forward to!

Here’s a recent reivew The Christian Manifesto did of FRANTIC. It’s reviews like this that remind me how small and insignificant I am in respect to God’s working in and through me.

A few months ago James Wilson approached me about joining him and five other authors in a little project he called 7 Hours. I loved the concept and agreed.  A proposal was developed and Tyndale House Publishers showed interest.

Well, the contracts are signed and 7 Hours will soon become a reality.

7 Hours is a series of seven novellas by seven authors exploring life, death, and time as we know it.

It’s mind-bending; it’s unique; it’s trail-blazing. Nothing like this has been done before.

Check out the special landing page for the 7 Hours project and “like” our official Facebook page to keep up with developments in real time.

Oh yeah, the other authors involved are:

I’m honored and thrilled to be working with these excellent authors.

Help us spread the word!